References
Balli, Riccardo. 2014. Apocalypso Disco. Milan: AgenziaX.
Cutler, Chris. 1994.“Plunderphonia”. Musicworks 60: 6–19.
Oswald, John. 1986. “Plunderphonics, or Audio Piracy as a Compositional Prerogative”. Musicworks 34: 6.
by Paolo Magaudda
Dancecult.net, vol. 8, n. 1, 2016 Frankenstein, or the 8-bit Prometheus
After having whistled quite a number of 8 bit versions of famous pop songs, and delighted my ears with chip-tune covers of black metal and classical music, I thought it was about time to extend micro-music aesthetics and re-contextualization to literature and remix Mary Shelley’s classic accordingly. Hence, my book Frankenstein, or the 8-bit Prometheus, available in 2017 through Chili Com Carne and Thisco and previously published in Italian in a slightly different version and title. You can catch a glimpse of it in the following text, an eclectic mix of music-related essays incorporating hyper mash-up, gabber, break-core, horrorcore and much much more, as seen from my first-hand experience as label owner (Sonic Belligeranza Records 2000–2017).

Shelley Bot @MaryShelleyfr (Shelley 1992: 12 + “Gothic” Ken Russell, 8 bit Cinema)
I passed the summer of 1816 in the environs of Geneva, at the Villa Diodati rented by Lord Byronanism with John Pus Rancidori and my future husband Pervy Bisex Shelley. The season was cold and rainy and after the customary séance, in the evenings we crowded around a pair of Technics1200 and amused ourselves with absurd hyper mash-ups of vinyl records which happened to fall into our hands. We used to mix everything together, from Hawaiian music to gabba, and these Sonic Monsters, together with the gloomy atmosphere of the villa, excited in us a playful desire for freestyle rapping. Thus we started to rap on the top of the aforementioned mutant juxtapositions, until Lord Byronanism, surely seized by an abusive and blasphemous euphoria, suggested a slam poetry competition on the most sickening sonic wretch! I suddenly had a premonition about the inevitable tragedy waiting for our wicked company, a retaliation on our explosive and irrepressible coprolalia. Sure enough, Lord Byronanism would have died during a Teknival in Greece; my beloved Pervy Bisex Shelley would have drowned during a House music-flavoured Pool Party and John Pus Rancidori would have committed suicide after having published his notorious “Vampire Freestyles” in 1819. Before dying violently myself, I, Mary Evilwin Shelley, intended to transcribe the sonic wretch completed that decisive night. My memories were vague and almost lost in my lysergic and precarious mind, so I found an odd way to bring my recollection to life: I stood like a human lightning rod on the roof of the Villa Diodati on a stormy night; the visceral Sound Blob I had created started to flow again in my body like the pouring rain in the irregular lightning. So here is a selection from 17 hyper mash-ups that might prove suitable to spark life into a new human breed.....The 8-bit Prometheus!

Lebensborn Mash-up vs Hyper-Mash-up
Mash-ups are made up by music contrasts, absurd juxtapositions, political incorrectness, hyperboles—the free association of ideas. When I think about this hyper-music fathered in a lab, what comes to my mind is the repugnant Nazi eugenics brought to Scandinavia by the Third Reich. With the term Lebensborn we invoke the German association created in 1935 by Heinrich Himmler with the goal of securing the racial purity through the birth of children of pure Aryan descent. The program was also conducted outside Germany, particularly in Norway, due to the physical features—blue eyes, blonde hair—of the local population that were deemed suitable to the improvement of the Aryan race. The Third Reich gave assistance to children born to Norwegian women and fathered by German soldiers: mothers received economic support and children could be sent to special institutions to receive food, medical assistance and a (Nazi) education. Apparently, the number of German offsprings born from 1940–1945 was 10,000-12,000. Half were raised in special Nazi nursery homes created by Lebensborn.
The most famous of these Lebensborn children is probably Anni-Fird “Frida” Lyngstad, the brunette from ABBA who sang with a sugar voice despite her bitter life experience (Connolly 2002). Try to play Fernando or Mamma Mia (where Frida’s voice stands out for its pleasantness) now that you know and tell me they don’t sound pretty twisted all of a sudden... But carrying on with my controversial association of ideas, I would say that the plunderphonics technique causes a similar modification in the genes of pop music: it warps its first goal (i.e. the numbing pursuit of turbo-capitalistic hedonism) in order to create something different, something literally bastardised (“bastard pop” is another term to refer to the genre). This new creature, the offspring of the most eclectic sound plagiarism, is fathered as a mocking means to subvert both the predictability of mainstream music and the strict mentality of some austere clubbers.
I think the best results can create hilarious cultural short circuits. Others aim to entertain the dance floor and don’t possess any traces of humor whatsoever. There are even some cut-ups that evoke a brisk sense of terror during a DJ set by using snippets of horror movies and creepy news, but in the end they tend to induce a sardonic laughter, rather than fear.
Some people are quite skeptical about the real power of cultural and political subversion that the crossovers technique would entail. According to Fringeli (2005), “Thus it comes as no surprise that so much mainstream pop is sampled these days—what is supposed to be ironic is essentially affirmative towards the music industry. It’s a desperate bid for acceptance, for commercial ‘success’.” While it might be stated that there is no longer a music industry as such (at least in the form that Fringeli had in mind while writing his bulletin), I also feel that there are very few audio-collages left that could be dubbed subversive—what I refer to as hyper-mashup. As soon as bastard pop consolidated as a music genre for MTV prime time, these hyper-mashups or Sonic Frankensteins, as I also like to call them, started to decline.

Shelley Bot #7 @MaryShelleyfr (Shelley 1992: 99-100)
It is with considerable difficulty that I remember the original era of my being; all the events of that period appear confused and indistinct. A strange multiplicity of sensations seized me, different files on the desktop being opened at the same time as I was playing and recording ambient sounds and sequencing them....Darkness then came over the screen and all of a sudden I realised I could not exist without the constant code-processing of my motherboard. The hyperkinetic flow of sounds of any sort was so huge that once transcribed on a pentagram, the countless number of notes constituting my sonic persona formed a compact black monolith. I was born Black Midi, just like the music sub-genre of the same name. The reboot of the system gave new life to my digital body, with the sequencer finally showing the music tracks that constituted my existence: a combination of drum breaks (with multiple effects such as wah-wah, flanger, echo, and so on), and wobbling basslines that complemented the gothic architecture of my DNA. Of all the files I could find in it, the cheapest and trashiest one was probably a .zip with the entire Milli Vanilli discography... so I began to sample from that dance music rubbish like a proper music prankster.
From the hovel in which the integrated sound card of my system resided, I was able to record several sonic events almost every weekend. Long rides of Valkyrian synth lines added an epic dark-trance feeling to the regular breakbeats set at 140 bpm that ensured a danceable balance to the DJ sets; the Sync Function of DJ mixing softwares was automatically beatmatching the tracks, thus avoiding any telluric soundslide. Those were the models of party music that humankind was listening to. During the week, when I was left alone in the woods, the lonely jingles of the digital processes of my CPU were resounding among the trees. As opposed to the aforementioned recordings, their frequencies sounded warped and their rhythmic loops schizoid, a sudden shock of hyperkinetic kick drums. How I was terrified when I established the utter aberration of my waveform, a series of spikes on the abscissa axis! It was obviously an abscess of pink noise that had been added during the mastering session. But then the waveform was suddenly sinking on the ordinate axis, a dreadful pitch-bending of the rhythm that bestowed a satanic feeling on the sample of Eighties commercial music that had been used. Compared to the perfect sounds of psytrance, breakbeat and tech house recorded during the weekend, the whole material proved to be painfully mismatched. At first I stared back, unable to believe that it was indeed my sounds to which I listened; and when I became fully convinced that I was in reality the music monster that I am, I was filled with the bitterest sensations of despondence and mortification. Alas! I did not yet entirely know the fatal effects of this miserable sonic deformity.

Shelley Bot #17 @MaryShelleyfr (Shelley 1992: 209-10, 214)
Alas! The battery of the Gameboy I relied on is gone; I feel that I shall soon die, and he, my music enemy and sonic persecutor, may still be in being. During these last days I tried to reset lsdj, the software I used to father such a frightful audio-blob, and I refused—and I did right in refusing—to create a remix version of it, and therefore generate a proper music genre, that of mash-up. My tenacious rejection has led him to destroy many rave-party devotees: tekno, Goa trance, drum’n’bass, dubstep, even ambient music fans... The task of his destruction was mine, but I have failed. I ask you, dear reader, to fulfill this duty and eradicate the Sonic Belligerence! In this hour, when I momentarily expect my release, a strenuous concern disturbs me: That the sonic wretch might continue to undermine the strict categorisations of music genres. Farewell, dear reader! Seek happiness in a 4/4 house loop and avoid any sonic ambition, even if it be only the apparently innocent one of hyper-composition, that is to say creating irreverent tracks from a multitude of different music sources. The turntable became slower, going from 45 to 33 RPM... the needle itself began to skip because of the stack of dust, until the eyes of Dr. Frankenstein closed forever, while the irradiation of a gentle smile passed away from his lips.
I have condemned my creator to misery; I have pursued him even to that irremediable ruin. There he lies, white and cold in death like frozen food. I look on the hands which used a humble Game Boy to grind the most incompatible music genres, from country music to the obscure Japanese Onkyokei, from ragga to the Alpini choirs, from polka to Gravewave, and so forth...Fear not that I shall be the instrument of future music mischief. My work is nearly complete. I shall die. I shall no longer be seized by audioschizoid attacks, nor surpass the hearing range that is audible by humans again. He is dead who called me into being: Farewell Dr. Frankenstein! You did seek my extinction, that I might not cause greater wretchedness to illegal rave parties; yet, the worst revenge did come from my very own existence, and from the sufferance caused by the awareness of being such a wretched audio-monstrosity. This, you never understood! He sprung from the tiny screen as he said this, upon the ice-craft which lay close to the vessel. He was soon borne away by the waves and lost in the darkness and distance that remained as a permanent screen saver on its monitor... 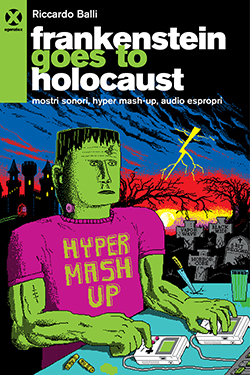